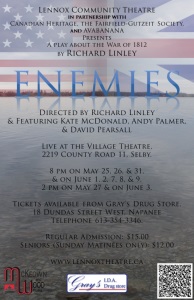 In November 1812, an American naval squadron set sail on Lake Ontario from Sackett’s Harbor, New York, determined to intercept the Royal Navy corvette Royal George off the coast of Prince Edward County. During the ensuing chase, the Americans landed a vessel at Ernesttown (modern day Bath, Ontario), and burned a merchant vessel there to the waterline. Royal George eventually escaped to Kingston with the Americans in hot pursuit.

In this fictional account, a young American sailor is lost overboard amid an exchange of fire at Ernesttown, and, after swimming ashore, finds his way to a modest nearby dwelling. The population has been evacuated, but among the few left behind is a young woman, daughter of a United Empire Loyalist, who lives in the house where the American has taken shelter. Frightened and alone, he reluctantly takes her hostage, but he is more the prisoner than she, for he is marooned in enemy territory, with few prospects for a successful escape.

In order of appearance: