Melodrama and fantasy in two acts. Running time: About 2 hours. 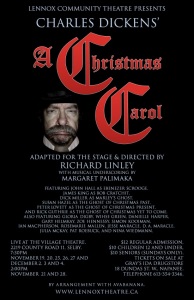 The Industrial Revolution has brought riches to some in London, but left much of the population destitute. Ebenezer Scrooge is among the fortunate few, but he has allowed his pursuit of wealth to eclipse all thoughts of tenderness for the rest of humanity. Scrooge does not discriminate: He hates everyone equally, and sees Christmas (“Humbug!”) as an excuse for his poor clerk, Bob Cratchet, to do him out of a day’s earnings once a year for no work done. Then, on Christmas Eve in 1843, Scrooge is paid a visit by the ghost of his long-dead partner, Jacob Marley. Marley is determined to save the terrified Scrooge from himself, and sets about doing so with the help of the Ghosts of Christmas Past, Present, and Yet To Come. Sure to delight young and old alike!

This stage version of Dickens’ much-adored novella was written for a small theatre with a working curtain. The scenes alternate between exterior and interior, with some action making use of the stage apron and the theatre’s aisles. A mixed cast of twenty or so, with ages ranging from about 7 to 70, can cover the dozens of identified characters in the play, though the actors playing old Scrooge and Bob Cratchit are best restricted to those parts alone. An early decision in the creation of this play was that, while not a musical, it should be accompanied by musical underscoring in the style of old melodramas.

In order of appearance: