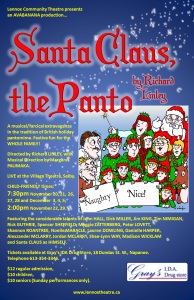 The evil genius and arch Christmas hater, Dr. Fiendish McAwful, sets out to become Santa’s nemesis, Anti-Claus, but first must learn the North Pole’s most carefully-guarded secret: How is it those reindeer are made to fly, and to fly so confoundedly fast? He and his twisted assistant, Eyesore, travel north from their sinister South Pole laboratory, intending to penetrate Santa’s Workshop in disguise.

Meanwhile, Kevin, a northern bush pilot, has landed at the North Pole in an attempt to rescue two weak-minded stable elves, Stoop and Scoop, who have allowed themselves to be seen. Kevin, previously an unbeliever, finds himself confronted with the magical reality of the Pole where he meets a talking, insecure reindeer named Cosmos, the workshop elves, Santa himself, Mrs. Claus, and the Clauses’ daughter, Sandra.

Mrs. Claus has been on the lookout for a young person who would make a suitable life partner for her daughter, and Kevin seems to fit the bill, so it’s unfortunate for her that he and Sandra don’t at first seem kindly disposed to one another.

McAwful and Eyesore show up at the Pole posing as tool salesmen, and set about their covert investigations. However, their nefarious activities have not gone completely unnoticed. Kevin is suspicious of them from the start, but more significant still, the Christmas Spirit herself has sensed that all is not well. She takes human form, and arrives at the Workshop to warn Santa that, for a change, he had better watch out.

It isn’t long, unfortunately, before Stoop and Scoop unwittingly reveal the secret of Santa’s reindeer – a potion mixed with their feed – to the visiting villains. At McAwful’s direction, Eyesore obtains a sample of the potion. Then, pausing only to subdue and kidnap the Christmas Spirit, the evildoers add some of the potion to the fuel in Kevin’s plane, and steal it to fly off to their lair at physics-defying speeds.

With the Christmas Spirit missing in action, the whole season is likely to be a washout unless Santa and his team can track down McAwful and foil his dastardly plot.