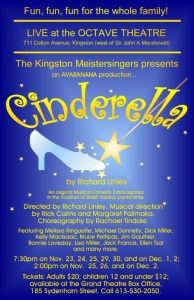 The classic story of a plucky, attractive, orphaned girl living an oppressed existence under the thumb of her wicked stepmother and ugly stepsisters. With the help of her friend Buttons, a young nobleman named Dandini, and an inexperienced but determined Fairy Godmother, she rises above her humble beginnings to marry her Prince Charming.