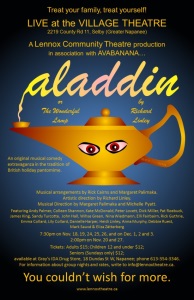 No, it’s not Disney’s version, most of the story is set in China, not the Middle East, and the princess is named Jade, not Jasmine, but this Aladdin is well-grounded in historical precedent. It is a holiday pantomime in the tradition of dozens of other retellings of Aladdin before it, the earliest of which were performed in the UK hundreds of years ago. It is a musical comedy that is sure to delight young and old alike. Of course, it tells the story of a poor young man named Aladdin who is lured by an evil sorcerer, Abanazar, into a mysterious cave – only to be trapped there by the sorcerer when he fails to yield up a certain old lamp. And yes, the lamp is magic, and it does produce a powerful genie who frees Aladdin from the cave and makes him fabulously wealthy. Oh, and of course the sorcerer connives to regain the lamp, kidnap the princess, and force a final battle between the forces of good and pretty-darned-bad in far away Egypt. But along the way we meet the laundress Widow Twankey, Aladdin’s outrageous mother; her brother, Aladdin’s Uncle Wishy Washy; the princess’s protective nursemaid, Nanny Fanny; the all-knowing Genie of the Ring; the Emperor of China; his long-suffering assistant, the Grand Vizier; and two buffoonish imperial guardsmen, Yin and Yang.